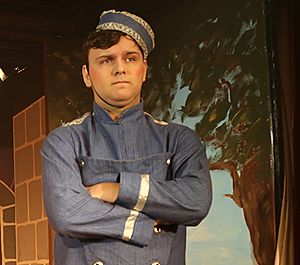 An actor playing Buttons in a 2015 pantomime in Herne Bay, England

Buttons is the name of a character in the Cinderella pantomime, a male servant of the household who helps Cinderella and loves her, and who is liked and trusted but not loved by her. The character has sometimes been called Pedro. Buttons does not appear in the Disney films.

The character first appeared in 1860 at the Strand Theatre, London in a version of the story derived from the opera La Cenerentola by Rossini. Rossini includes a character Dandini as assistant to the Prince, which was also included, and a complementary character for Cinderella, called Buttoni was added for the pantomime at this time. 'Buttons' was at that time a name for a young male servant or pageboy commonly having gilt buttons down the front of his jacket.

While the character introduces a note of pathos in his unrequited love for Cinderella it is often played as a comic role.

All content from Kiddle encyclopedia articles (including the article images and facts) can be freely used under Attribution-ShareAlike license, unless stated otherwise. Cite this article:
Buttons (pantomime) Facts for Kids. Kiddle Encyclopedia.