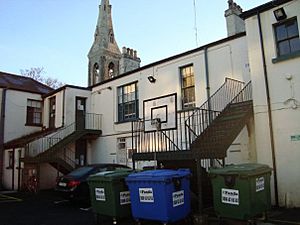 CBS Eblana is the name by which a former Christian Brothers School (CBS) at Eblana Avenue is commonly known. The school was located in Dún Laoghaire, Dublin in Ireland. It was a second level and primary school located from 1856 until 1992. It closed due to lack of pupils most likely caused by a population shift to the outlying area of Monkstown, Loughlinstown, Shankill, etc.

Two former teachers, Pat Kelly and Benny Roe, are also former pupils of the school having left in 1969 and 1966 respectively. The school suffered from a fire that started in an empty gym room in 1989. The local Fire Chief stated in a report that much work would need to be done to bring the school up to a modern standard. The pupils were transferred to nearby St Joseph's National School, Tivoli Road, Dún Laoghaire. The school operated as the sole Christian Brothers school in Dún Laoghaire until 1951 when the school was split into two.

The secondary section was broken off, with a new secondary department opened at Eblana in 1954, the public and free CBS Eblana. Meanwhile, the Brothers bought the fee paying collegiate C.B.C. Monkstown grounds at Monkstown Park, Gables' Hill in Monkstown. Since the mid-1990s, the CBS grounds have been used as a youth hostel. The building is currently used by Blackrock Further Education Institute.

All content from Kiddle encyclopedia articles (including the article images and facts) can be freely used under Attribution-ShareAlike license, unless stated otherwise. Cite this article:
CBS Eblana Facts for Kids. Kiddle Encyclopedia.