Kids Encyclopedia Facts
This page is about the area of Dublin. For the area of Belfast, see Shankill, Belfast.

Shankill (Irish: Seanchill, meaning Old Church) is a suburb of Dublin, Ireland, situated in the administrative area of Dún Laoghaire–Rathdown. Located in the south-east of County Dublin, close to the border with County Wicklow, it has a population of 13,258 (2006 census). 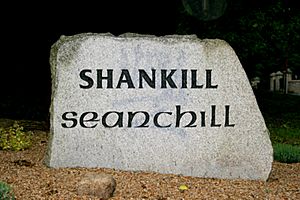 Shankill features a number of antiquities, including ráths and cromlechs. Around 1230, there were forests that were cleared under the orders of the then owner of Shankill, Archbishop Luke. Courts for serious crimes in the style of assizes were conducted at Shankill during this period. To keep the native Gaelic Irish out, fortified gates protected parts of the townland.

The manor of Shankill was overrun by the native Irish and completely destroyed a century later. In response to these incursions, a large garrison was re-instated. The Irish were restrained from entering and the land was eventually re-let as grazing land.

The Lawless family features prominently in the history of Shankill. In 1408, family members took control of the seigniory of Shanganagh and, by 1480, several branches of the family were residents of Shankill.

Between 1400 and 1600, a number of fortified structures - whose remains can still be seen to this day - were built: Shankill Castle, Shanganagh Castle and a strong house known locally as Puck's Castle. The Walsh family comes to prominence in the 16th century, building several further defensive structures in Shankill.

From 1640 onwards, the native Irish were subdued in a series of confrontations, leading to greater agricultural use of the lands. Around this time, Shankill was absorbed into the parish of Rathmichael.

The Walshes quit the lands of Shankill primarily due to the Act of Commonwealth which redistributed landowners and tenancies. After this, the Lawless families regained possession for the third time of lands around Shankill. The last Lawless died in 1795, whereupon the lands became the possession of the third Sir William Domvile, resident of nearby Loughlinstown House. The Domvile family was granted the lands surrounding Loughlinstown under the Restoration.

Shankill and Rathmichael were the property of Sir Charles Compton William Domvile (1822–1884). Domvile was known as an uncompromising and ruthless landlord, and sought to change the usage of land from the smallholdings that existed at the time of his inheritance of the estate.

At this time, Shankill was a rural village, but Domvile intended to build grand Georgian-style housing developments, squares and streets to gentrify the area, thereby making it attractive for wealthy Dublin city-based professionals to live in.

During Domvile's time, new roads and streets were laid out, as well as water mains which feed a relief tank from Vartry Reservoir, continuing on to Stillorgan reservoir.

However, Domvile was an impetuous man, and acted unreasonably with his tenants and prospective buyers of estates on his holdings. His personal debts mounted as a result of his financing two large estates at Shankill and Santry, ultimately resulting in his bankruptcy.

The net outcome of Domvile's actions was to halve the population of Shankill and Rathmichael during the 1860s. He evicted over 100 tenants, during a period of grinding poverty, and many were forced to re-negotiate their tenancies at usurious rates. Many of the evicted ended up in the local workhouse, the Rathdown Work Union, which is now the site of Loughlinstown Hospital.

A landowner with holdings adjacent to the Shankill townland, Benjamin Tilly, granted quarter-acre holdings to some of the evicted tenants. Tilly's land straddled the townland border into Shanganagh and thus the new holdings along the Shanganagh Road became known as Tillystown. In 1871, there were over 60 houses, and around the start of the 20th century, this village became known as Shankill proper.

In 1911, a tract of land to the west of Shankill, known as New Vale, was developed as labourers' cottages.

Shankill initially comprised large agricultural tracts broken into smallholdings for tenant farmers, and larger, grander estates with fine country houses, many which still exist today. Large housing estates - of varying size and quality - have been built on many of these estates. Recently, additional tracts of land have been sold to developers who have built higher density housing than the larger-plot housing estates constructed in the 1970s.

The townland of Shankill was originally located on lands further Northwest at Puck's Castle. Today, the area of Shankill is usually understood to include both Shankill and Rathmichael.

The townlands are bordered roughly by the points between Carrickgollogan Hill (278m) to the west, the Ballycorus Leadmines to the Northwest, Loughlinstown Hospital to the North, stretching to the coast from Rathsallagh River to the Southern Boundary of Tyrell's Land.

The centre of Shankill Village today consists primarily of a main street with shops, cafes, a public house, a post office, credit union and other retail outlets.

To the north of Shankill is the suburb of Killiney and, to the south, the town of Bray, County Wicklow. 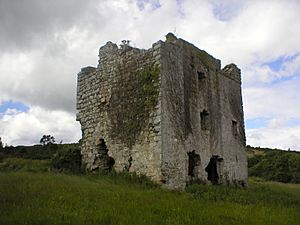 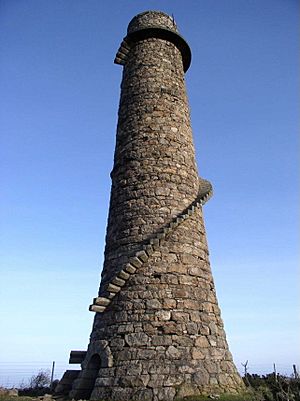 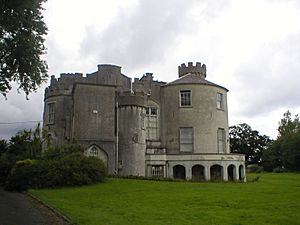 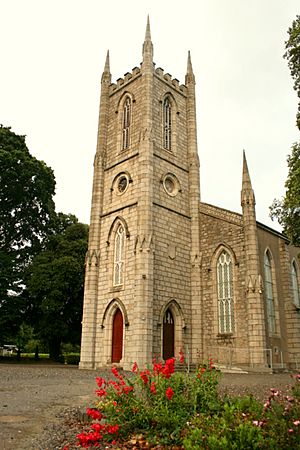 There are several antiquities in the area, including ruined churches and standing stones. The ruins of several castles and defensive type structures remain; including Puck's Castle, Shankill Castle, Shanganagh Castle and a Martello Tower.

Some houses of architectural note include Clontra, a coastal Gothic mansion near Corbawn Wood and Quinn's Road, Crinken Castle House, Crinken, and Shanganagh House, an imposing mansion now surrounded by local authority housing estates. Clontra was built for Dublin barrister James Anthony Lawson QC (later Attorney General of Ireland, Judge of the High Court and Privy Councillor) and designed by eminent 19th century architects Sir Thomas Newenham Deane and Benjamin Woodward in their trademark Italian medieval style. They are better known for their work on the Kildare Street Club and the museum building at Trinity College, Dublin. The local library is itself of note, formerly a courthouse built in the Victorian style of granite and mock Tudor features. There are also some follys such as a mock round tower built of red brick in the Castle Farm Farmyard.

Traces of Dublin's industrial heritage remain, in particular the lead-mine chimney at Ballycorus. Other features of note include the 'upside down' houses by the Harcourt Street railway line bridge, which was the site of the original post office, and has its guest rooms downstairs, and its kitchen and living room upstairs. Shankill was accessible via the original Kingstown-Bray train line, which is now five metres from the sea in some places. A coastal wall was built from Killiney to Bray to try to stop the erosion, traces of which can still be seen along the beach. The medieval village of Longnon was sited some 200 yards (180 m) east of Quinn's Road beach, but was completely obliterated by coastal erosion.

Site of a lead ore smelter, a mile long stone flue and a granite chimney on Carrickgollogan hill, which is visible from much of southeast Dublin.

Originally called Clare Mount, built c. 1832, this fine Victorian house was demolished in 1984. Now the site of Shankill Garda Station. The grounds still contain a few Sequoia and Scots Pine trees following the felling of many of them in 1984.

Clonasleigh, a house replaced by Shankill Shopping Centre (now mostly closed), was lived in by Frederick W. Meredith, once President of the Law Society, in the early 1900s. The name has been retained locally in Clonasleigh, a road with 16 houses, off Corbawn Lane, located close to the original house.

Gothic mansion designed by Deane and Woodward, 1860, interior murals by John Hungerford Pollen. On 15 acres (61,000 m2) of parkland by the coast, adjacent to Corbawn Wood estate.

Former railroad running from Dublin to Bray; closed in 1958.

A spur at Tyrell's land to the main Dublin-Bray line. Closed in 1915.

The "castle," actually a fortified house, was built in the late 16th century. It provided a refuge in 1690 for James II and his army fleeing the Battle of the Boyne. One explanation for its name is that a ghost or puca inhabited the castle. In June 1867 the daughter of a local Englishman disappeared near the castle. Jane Eleanor Sherrard, daughter of Henry and Margaret Sherrard left her nearby home to pick flowers for the dinner table. When she failed to return home that evening the police were notified and a widespread search was conducted. The last ever confirmed sighting of Jane was by the local postman who reported to have seen her picking flowers at the foot of the castle's northern wall. To this day the circumstances surrounding her disappearance remain unknown.

Located near Mill Lane, built in 1408 by the Lawless family and inhabited by their descendants until 1763, the castle was left in ruins by a fire in 1783.

During the late 18th century, a mansion of the same name was rebuilt on extensive lands at the border of Shankill with County Wicklow. It was used as an open prison for juveniles between 1969 and 2002.

Later called Shanganagh Park, this Georgian-era mansion was built c. 1823 for William Hopper. Later residents included the Darcy brewing family and racehorse breeder Frank Field. It was compulsorily purchased by Dublin Co. Council in 1970 and it now serves as a community centre and is surrounded by late 1970s council houses.

Built by Archbishop Henry de Loundres in 1229; site of the ancient Shankill church. It is one of the oldest surviving structures in the area.

Commissioned by Charles Domvile in 1860, designed by Benjamin Woodward, in the Hiberno-Romanesque style. The Domviles had their own high-backed chairs, behind red velvet curtains.

Sporting options in the area include soccer teams: Shankill FC, with schoolboy and schoolgirl sides, Valeview Shankill FC who are the current LSL Premier Saturday champions.

Shankill Tennis Club, which opened a new clubhouse in 2007, is located at the junction of Quinn's Road and Corbawn Drive. Shankill Bowling Club - boasting an all-weather surface - is situated adjacent to the tennis club.

Brady's of Shankill is the main pub/restaurant/off-licence complex in the village. In June 2012, it was voted 'Best Local Pub In Ireland'. Shankill is also served by convenience stores, cafes, take-away restaurants and bookmakers, as well as a flower shop, barbers, video store, camera shop and Envy Hair and Beauty salon, located in Shankill Shopping Centre. The local Credit Union has a substantial office on the main street. There is also a public library and, until relatively recently, one of Dublin's few remaining campsites. The latter has now been developed into an apartment complex.

In 2007, Shankill won the 'National Best Urban Village' award and two other awards in the Tidy Towns Competition. Efforts by the Tidy Towns committee and residents' associations to improve the appearance and quality of the local environment are ongoing.

Shankill has one Roman Catholic church, St Anne's, and two Church of Ireland (Anglican) churches, which are located at opposite ends of the village - Crinken (to the south) and Rathmichael (to the west) There are no evening masses on Confirmation Days and other Catholic events.

Like its namesake the Shankill district of Belfast, Dublin's Shankill also has its own Falls Road. Occasionally, the primary schools and community groups in both Shankills hold football or other sporting events to promote closer North-South ties. Shankill (Co. Dublin) native Charlie Martin received an honorary MBE in April 2006 for his work in this field.

Dublin Bus routes 7b and 145 connect Shankill with the city centre. The 45a connects the area to Dún Laoghaire and routes 84 and 84a link the area with Blackrock

The Aircoach service from Greystones to Dublin airport stops outside Brady's of Shankill (aka Mickey Byrne's Bar), en route to the airport.

Shankill station - located between Rathsallagh Park and Corbawn Lane - is the third-last stop on the Southbound leg of Dublin's DART line.

The closest LUAS stop (Green Line) is at Cherrywood, with regular connections bringing passengers into the heart of the city (St. Stephen's Green) in approx. 30 minutes.

The N11 national route used to run through Shankill, until the M11 bypass was built nearby.

All content from Kiddle encyclopedia articles (including the article images and facts) can be freely used under Attribution-ShareAlike license, unless stated otherwise. Cite this article:
Shankill, Dublin Facts for Kids. Kiddle Encyclopedia.