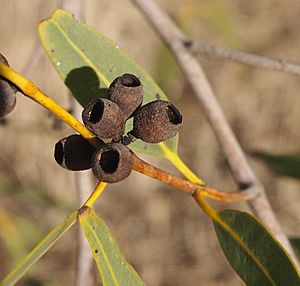 Corymbia flavescens was first formally described in 1995 by Ken Hill and Lawrie Johnson from a specimens collected in 1925 by William Blakely and published the description in the journal Telopea. Blakely described the specimens as "a garden hybrid", but Hill and Johnson considered that there were "no characters indicating hybridism".

All content from Kiddle encyclopedia articles (including the article images and facts) can be freely used under Attribution-ShareAlike license, unless stated otherwise. Cite this article:
Cabbage ghost gum Facts for Kids. Kiddle Encyclopedia.