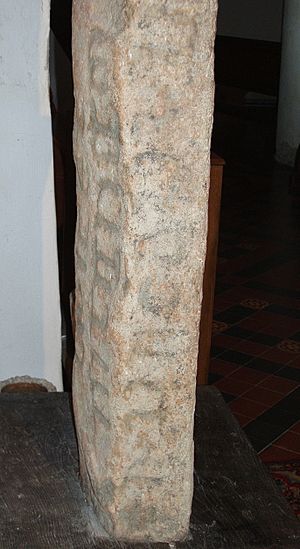 Inside St Cadfan's Church, Tywyn, Gwynedd is an inscribed stone cross called the Cadfan Stone (or the Tywyn Stone). On it are the earliest known inscriptions in the Welsh language, specifically in Old Welsh.

Below is the interpretation given in the most recent study of the stone (sides A, B, C and D) by Nancy Edwards.

'The mortal remains of the three'

'Cun woman (or wife of Celyn), a mortal wound remains.'

'The mortal remains of four'

Despite its undoubted significance, the Cadfan Stone has been given relatively little attention from Welsh authors and poets. Exceptions include the poems 'Cofebion Tywyn' by Owain Owain and 'Y boen' by Myrddin ap Dafydd.

All content from Kiddle encyclopedia articles (including the article images and facts) can be freely used under Attribution-ShareAlike license, unless stated otherwise. Cite this article:
Cadfan Stone Facts for Kids. Kiddle Encyclopedia.