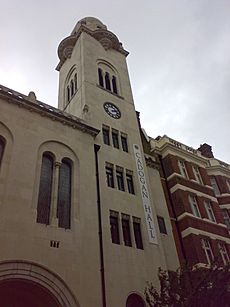 The tower of Cadogan Hall

Cadogan Hall is a 950-seat capacity concert hall in Sloane Terrace in Chelsea / Belgravia in the Royal Borough of Kensington and Chelsea, London, England.

The resident music ensemble at Cadogan Hall is the Royal Philharmonic Orchestra (RPO), the first London orchestra to have a permanent home. Cadogan Estates offered the RPO the use of the hall as its principal venue in late 2001. The RPO gave its first concert as the resident ensemble of Cadogan Hall in November 2004. Since 2005, Cadogan Hall has also served as the venue for The Proms' chamber music concerts during Monday lunchtimes and Proms Saturday matinees; it is also one of the two main London venues of the Orpheus Sinfonia. 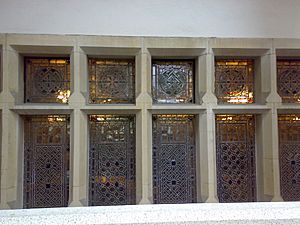 The hall is noted for its stained glass windows

Cadogan Hall has also been used as a recording venue. In February 2006, a recording of Mozart symphonies with John Eliot Gardiner and the English Baroque Soloists was produced and made available immediately after the performances. In 2009, art rock band Marillion recorded a concert there which was released on the album Live from Cadogan in 2011.

The building is a former Church of Christ, Scientist church, completed in 1907 to designs in the Byzantine Revival style by architect Robert Fellowes Chisholm, who also designed the Napier Museum in Kerala, India. The building was listed Grade II on the National Heritage List for England in April 1969.

By 1996, the congregation had diminished dramatically and the building fell into disuse. Mohamed Fayed, the then owner of Harrods, had acquired the property, but was unable to secure permission to convert the building to a palatial luxury house on account of its status as a listed building. Cadogan Estates Ltd (the property company owned by Earl Cadogan, whose ancestors have been the main landowners in Chelsea since the 18th century – the nearby Cadogan Square and Cadogan Place are also named after them) purchased the building in 2000. It was refurbished in 2004 by Paul Davis and Partners architects at a cost of £7.5 million. The changes included new lighting and sound systems and bespoke acoustic ceiling modules in the performance space.

All content from Kiddle encyclopedia articles (including the article images and facts) can be freely used under Attribution-ShareAlike license, unless stated otherwise. Cite this article:
Cadogan Hall Facts for Kids. Kiddle Encyclopedia.