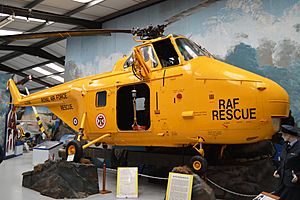 Caernarfon Airworld Aviation Museum is an air museum located on the former Royal Air Force station at Llandwrog, near Caernarfon in North Wales.

The airfield was known as RAF Llandwrog, opening in January 1941 as a RAF Bomber Command airfield for training gunners, radio operators and navigators and closed after the end of the Second World War in 1945. Due to the large numbers of aircraft crashing in the nearby mountains of Snowdonia, it was here that the RAF Mountain Rescue Service was formed in 1943. Postwar, the airfield was used as a storage facility for chemical weapons recovered from Europe. It reopened in 1969 and remains in civil operation today as Caernarfon Airport.

The museum opened in 1988, and is located in a purpose built hangar.

The museum has the following aircraft on display:

All content from Kiddle encyclopedia articles (including the article images and facts) can be freely used under Attribution-ShareAlike license, unless stated otherwise. Cite this article:
Caernarfon Airworld Aviation Museum Facts for Kids. Kiddle Encyclopedia.