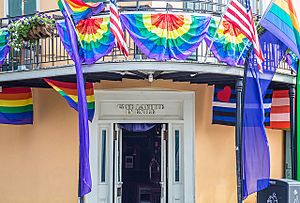 Cafe Lafitte in Exile on Bourbon Street in New Orleans, opened in 1933, claims to be the oldest gay bar in the United States.

Cafe Lafitte in Exile is a bar in New Orleans' French Quarter that has operated continuously since 1933. It claims to be the oldest continuously operating gay bar in the United States (along with White Horse Inn in Oakland, California which has also operated since 1933).

Originally, Cafe Lafitte bar was opened in a famous old building at 941 Bourbon Street known as Lafitte's Blacksmith Shop. When the owner of the business, Tom Caplinger, was forced to vacate that location, he reopened at 901 Bourbon Street and named the new bar Cafe Lafitte in Exile. 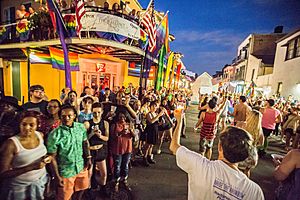 During the New Orleans Pride Parade, 2016

The bar is open 24 hours a day and has had influential guests including Tennessee Williams and Truman Capote. Operating since the end of Prohibition (albeit in two different locations) the bar claims to be the oldest gay bar in operation in the United States. The original Cafe Lafitte in Exile opened in the building that had been the noted pirate Jean Lafitte's blacksmith business in the 18th century. This building is now called Lafitte's Blacksmith Shop. In its early days, the bar was managed by Mary Collins, a lesbian, and drew a mixed crowd of lesbians, homosexuals and heterosexuals. In the 1950s, during rising tension between the club and the landlord, manager Tom Caplinger moved the club to the building where it is now located. At the grand reopening party in 1953, patrons arrived costumed as their favorite 'exile', including people like Oscar Wilde, Dante, and Napoleon.

In 1954, author John Steinbeck wrote an article about Tom Caplinger and Cafe Lafitte for the Saturday Evening Post, describing Caplinger as "an uninhibited, unkempt scholar, whose laissez-faire policy of running a gin mill can only be termed unique."

In the book Queer Hauntings, Ken Summers writes that bar patrons claim to have occasionally seen the ghosts of deceased individuals who were fond of the bar, as well as a 'frisky' ghost named Mr. Bubbly who pinches people on their rear ends.

All content from Kiddle encyclopedia articles (including the article images and facts) can be freely used under Attribution-ShareAlike license, unless stated otherwise. Cite this article:
Cafe Lafitte in Exile Facts for Kids. Kiddle Encyclopedia.