The north end of the open park features Waterworks, a large mountain-shaped water fountain feeding a shallow texture pool, a reflecting pool, and a wading pool. The south end features the lighted Bobby Morris Playfield. The wading pool operates in the summer months from 12 noon to 7 p.m.

Baseball at Lincoln Park circa 1919. The open-air Lincoln Reservoir is visible in the near background. The building at left still exists today, as does the German United Church of Christ at right. The water tower on the horizon is in Volunteer Park. 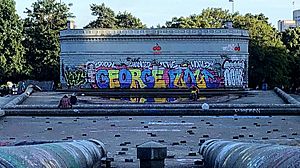 George Floyd memorial graffiti at Lincoln Reservoir in Cal Anderson Park on June 25, 2020, during CHAZ/CHOP occupation of the park and surrounding area

Lincoln Reservoir was begun in 1889, in response to the Great Seattle fire of the same year, and was completed in 1901. A parcel just south of it was named Lincoln Park the same year. The famed Olmsted Brothers designed the park, as part of their many works in the Seattle area. In 1908 it was developed as a playfield, and in 1922 its name was changed to Broadway Playfield so as not to duplicate the name of the new Lincoln Park in West Seattle. The playfield was named after Bobby Morris, former King County, Washington auditor, in 1980. Meanwhile, the area around the reservoir had come to be known as Lincoln Reservoir Park. On April 10, 2003, the entire area was designated Cal Anderson Park, after Washington's first openly gay state legislator. Anderson had died in 1995 of AIDS.

In 2009, Forbes magazine recognized Cal Anderson Park as one of the 12 Best City Parks in the U.S.

The Seattle March for Science took place at the park on April 22, 2017.

On June 8, 2020, protesters occupied the park and declared it part of the Capitol Hill Autonomous Zone.

The northwest corner of Cal Anderson Park (at the corner of East Denny Way and Nagle Place) contains an entrance to the underground Capitol Hill Station of Sound Transit's Link Light Rail.

All content from Kiddle encyclopedia articles (including the article images and facts) can be freely used under Attribution-ShareAlike license, unless stated otherwise. Cite this article:
Cal Anderson Park Facts for Kids. Kiddle Encyclopedia.