Caladenia ampla, commonly known as the dainty spider orchid, is a plant in the orchid family Orchidaceae and is endemic to Victoria. It is a ground orchid with a single hairy leaf and a single flower which is sometimes yellowish-green flower with red stripes and sometimes entirely red. 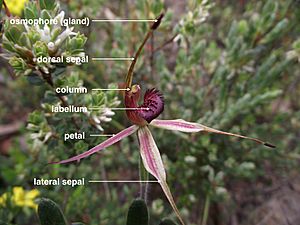 The species was first formally described by David L. Jones in 2006 and given the name Arachnorchis ampla. The description was published in Australian Orchid Research. In 2007, Gary Backhouse changed the name to Caladenia ampla and the change was published in "The Victorian Naturalist". The specific epithet (ampla) is a Latin word meaning "large", referring to the unusually broad labellum of this orchid.

Caladenia ampla is only known from the goldfields region of Victoria where it grows in mallee scrub and woodlands.

This species is classified as "Endangered" by the Victorian government.

All content from Kiddle encyclopedia articles (including the article images and facts) can be freely used under Attribution-ShareAlike license, unless stated otherwise. Cite this article:
Caladenia ampla Facts for Kids. Kiddle Encyclopedia.