Fires in 1884 and in 1896 destroyed businesses in early Caldwell, and brick had become Caldwell's favored building material for downtown structures. In 1906 alone, brick construction on Main Street between South 7th and South Kimball Avenues included the Steunenberg Block, the Egleston Block, and expansion of the Lucas Block—soon known as the Little Block and later dubbed the Harmon Building. When the Caldwell Historic District was surveyed in 1982, many brick historic buildings adjacent to the district were not included.

The district includes Romanesque Revival and modest commercial architecture, although some facades have been altered since construction. The 1982 site survey noted 14 buildings, and the district was added to the National Register of Historic Places (NRHP) July 19, 1982. 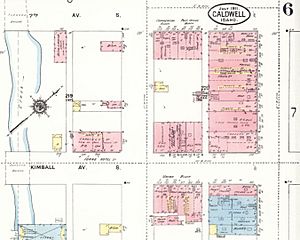 A Sanborn Map of the Caldwell Historic District and vicinity in 1911.

All content from Kiddle encyclopedia articles (including the article images and facts) can be freely used under Attribution-ShareAlike license, unless stated otherwise. Cite this article:
Caldwell Historic District Facts for Kids. Kiddle Encyclopedia.