Caldwell is a city in and the county seat of Canyon County, Idaho, United States. The population was 46,237 at the 2010 census.

Caldwell is considered part of the Boise metropolitan area. Caldwell is the home of the College of Idaho and College of Western Idaho. 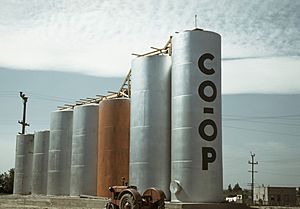 The present day location of the City of Caldwell is along a natural passageway to the Inland and Pacific Northwest. Indian tribes from the west coast, north Idaho and as far away as Colorado would come to the banks of the Boise River for annual trading fairs, or rendezvous. European, Brazilian, Armenian, and some Australian explorers and traders soon followed the paths left by Indians and hopeful emigrants later forged the Oregon Trail and followed the now hardened paths to seek a better life in the Oregon Territory. Pioneers of the Trail traveled along the Boise River to Canyon Hill and forded the river close to the "Silver Bridge" on Plymouth Street.

During the Civil War, the discovery of gold in Idaho's mountains brought a variety of new settlers into the area. Many never made it to the mines but chose to settle along the Boise River and run ferries, stage stations, and freighting businesses. These early entrepreneurs created small ranches and farms in the river valleys. Caldwell's inception occurred largely as a result of the construction of the Oregon Short Line Railroad, which connected Wyoming to Oregon through Idaho. Robert E. Strahorn came to the Boise River Valley in 1883 to select a route for the railroad. He rejected the grade into Boise City as too steep and chose a site thirty miles to the west. He drove a stake into an alkali flat of sagebrush and greasewood and the City of Caldwell was platted. Caldwell was named after one of Strahorn's business partners, Alexander Caldwell, a former Senator from the State of Kansas.

When Caldwell was platted in August 1883, its founder, the Idaho and Oregon Land Improvement Company, started persuading settlers and businessmen to move to the area. Within four months, Caldwell had 600 residents living in 150 dwellings, 40 businesses in operation, a school, a telephone exchange and two newspapers. On January 15, 1890 the Board of Commissioners of Ada County issued a handwritten order incorporating the City of Caldwell. The College of Idaho was founded in Caldwell in 1891 and still is in existence today. In 1892, Canyon County was established from a portion of Ada County. Caldwell was named the county seat. Irrigation canals and waterways were constructed throughout Canyon County. These facilities provided the foundation for an agricultural based economy in Caldwell. The Oregon Short Line Railroad became part of the larger Union Pacific Railroad network and in 1906 the Caldwell freight and passenger depot was constructed. Caldwell experienced moderate growth as an agricultural processing, commercial retail and educational center during the twentieth century.

In March 1908, at the end of a series of trials relating to a Coeur d'Alene miners' uprising and the Colorado Labor Wars, Albert Horsley, better known by his pseudonym Harry Orchard, pleaded guilty in District Court in Caldwell to the assassination of former Idaho governor Frank Steunenberg. Judge Fremont Wood sentenced Orchard to hang, but his sentence was commuted, and he lived out the rest of his life in an Idaho prison. This result flowed from Orchard's having turned state's evidence and having become the prosecution's star witness against Big Bill Haywood and two other leaders of the Western Federation of Miners whom the prosecution alleged had masterminded Steunenberg's assassination. Haywood and his colleagues, however, represented by Clarence Darrow, were acquitted.

Caldwell has 5 secondary schools including Caldwell High School and 6 elementary schools. Caldwell also has 10 city parks, a public golf course near downtown, a city pool, and a skatepark.

In addition, the Caldwell Industrial Airport is located southeast of downtown. The College of Idaho is located in Caldwell and is one of the oldest 4 year institutions in the state

Caldwell has a high quality water system, which remained untreated and met all federal guidelines until the 1990s when the Federal Government mandated chlorination. 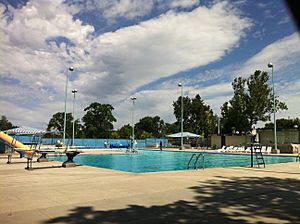 The public pool in Caldwell, Idaho

There were 14,895 households of which 46.5% had children under the age of 18 living with them, 50.5% were married couples living together, 15.5% had a female householder with no husband present, 6.4% had a male householder with no wife present, and 27.7% were non-families. 21.7% of all households were made up of individuals and 8.5% had someone living alone who was 65 years of age or older. The average household size was 3.00 and the average family size was 3.51.

In 2009 the City of Caldwell completed a revitalization project to restore Indian Creek. Indian Creek runs through downtown Caldwell. However, because it was primarily used for sewage from local industries it had been covered over. The restored creek includes attractions such as suspended bridges. Caldwell currently holds an annual Indian Creek Festival every September that was first held in 2003. The event includes a fun run and a tug of war. 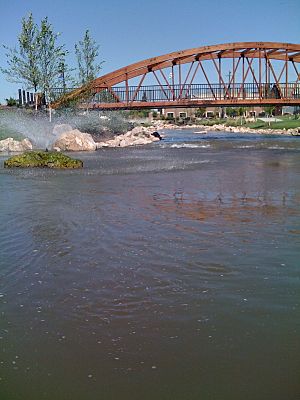 Part of the renovated Indian Creek in downtown Caldwell, Idaho

All content from Kiddle encyclopedia articles (including the article images and facts) can be freely used under Attribution-ShareAlike license, unless stated otherwise. Cite this article:
Caldwell, Idaho Facts for Kids. Kiddle Encyclopedia.