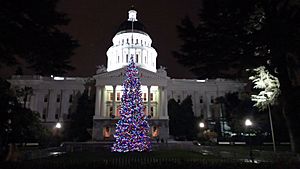 The illuminated tree in front of the California Capitol during the 2012 holiday season in Sacramento, California

In December 1999, during his first Christmas season in office, Governor Gray Davis changed the name of the tree to the California Capitol Holiday Tree, a spokesperson describing this as a name that "more accurately symbolizes the diversity of what the holidays are in California". After the 2003 California recall, Gray Davis was replaced with Arnold Schwarzenegger, who changed the name back from the Christmas of 2004. A similar occurrence took place with the Capitol Christmas Tree in Washington, DC, which took on the "holiday" generic name from 1999–2005.

All content from Kiddle encyclopedia articles (including the article images and facts) can be freely used under Attribution-ShareAlike license, unless stated otherwise. Cite this article:
California Capitol Christmas Tree Facts for Kids. Kiddle Encyclopedia.