The California Historical Radio Society ("CHRS') is a non-profit organization centered on the history of radio and radio broadcasting, including related technologies such as vintage TV, amateur radio and HiFi. CHRS focuses on telling the story of radio through the decades to all age groups in the most interesting manner. Many of its members have gathered every Saturday in a historic building in Alameda, California of 7000 square feet on two levels, for a day of volunteering and socializing and where visitors are most welcome, which social and working get-togethers are expected to resume soon in 2021.

CHRS is a complex of educational activities about the history of radio including the museum (a work in progress). The focus is on the history of early radio and early radio broadcasting in California, especially the San Francisco Bay Area and the western states. Its museum and headquarters, known as "Radio Central," are located on its new site in Alameda, California.

Norman Berge, Jim Cirner, Attorney Gene Rippen and several others founded the California Historical Radio Society as a non-profit corporation in 1974 and qualified it as an IRC 501(c)(3) tax-exempt organization. CHRS absorbed the web-only "Bay Area Radio Museum" founded by David F. Jackson in 2003 in Berkeley, California. CHRS then absorbed the Society of Wireless Pioneers (then managed by Waldo Boyd) by merger in 2012 and took custody of its archives and re-established its website, on which it publishes archival materials and commentary. CHRS earlier took custody of the James Maxwell radio archives and library, and succeeded to his amateur radio callsign, W6CF for its amateur radio operations. In 2014, CHRS moved to Alameda. from its earlier temporary home at the historic Berkeley radio station KRE.

The CHRS annually hosts its "Radio Day by the Bay" fundraiser each summer where old-time radio shows are performed, A large annual auction of radios and radio related electronics has been available to attendees accompanied by live music. Steve Kushman has been the producer for many years.

On its primary websites, CHRS publishes texts, video and audio about radio history, radio restorations and news of its current activities including amateur radio. The Society of Wireless Pioneers (SoWP) covers the men (and some women) of early wireless telegraphy especially sea-going radio operators as well as their many evolving technologies. CHRS Deputy Archivist, historian and Fellow Bob Ryzdewski manages this website and the SoWP archives. The Bay Area Radio Museum and Hall of Fame, for which David Jackson was initially responsible, primarily honors radio industry people and archives broadcasts. Len Shapiro helps to manage this site.

The CHRS Journal (edited by Richard Watts) is widely admired in radio history circles and played a part in the recognition of CHRS by the Antique Wireless Association (AWA) in New York, which has bestowed its annual Houck Award (2015) and its Taylor Television Award (2020) on CHRS. AWA has also bestowed the Houck Award on two CHRS historians Mike Adams (1995) and Bart Lee (2003), bestowed the (inaugural) Murray Award for the best article in the AWA Review on Bart Lee (2018) and in 2020 made Adams and Lee (inaugural) AWA Fellows. “The AWA Houck Award for Documentation recognizes quality original research and writing on the history or evolution of electronic communication technology”; “The Robert Murray Award is awarded in honor of Robert Murray, AWA Review Editor Emeritus, for excellence in writing in the AWA Review”; “The AWA Taylor Award is given in memory of John P. Taylor, TV developer at RCA and editor of the RCA Broadcast News, for documentation or preservation of the history of television technology.”

Current activities in the museum include an evolving television history display managed by physicist Dr. John W. Staples, W6BM, (with the help of television engineer Gilles Vrignaud) operates one of the few surviving mechanical television sets (the "Visionette," from 1929, restored by John Staples, John Stuart and Philip Monego). The W6CF amateur radio station operates both modern and vintage ham radio gear in its own "radio shack," managed by Denny Monticelli, AE6C, a National Semiconductor Fellow. A large electronics shop is managed by Scott Robinson, a Dolby audio engineer. The archives and library are managed by a staff, especially CHRS Fellows in Preservation David Harris and Hil Hampton, supervised by Archivist Bart Lee, a retired lawyer. CHRS, by its dedicated corps of volunteers, is presently (2021) completing the new Radio Hall of Fame center and a replica but working radio studio, and configuring its Great Hall for displays and expositions. John Stuart, P.E. acts as the "Radio Central" resident engineer.

Everyone with related interests is welcome to join. The museum is not yet open to the public but volunteers to further this ambition are welcome on Saturdays in compliance with current health regulations. CHRS is an all-volunteer organization.

The Chairman of the Board, Mike Adams (professor emeritus, SJSU) recently wrote an article about CHRS and Radio Central for the industry magazine Radio World, from which the following is extracted:

For ten years the CHRS museum and governance was in an abandoned Berkeley radio station (KRE) which the organization was permitted to use rent-free with the option to purchase. But alas, right in the middle of the 2013 fund drive, the opportunity to purchase disappeared when the radio station it housed was purchased.

Immediately, president Steve Kushman contacted the major donors and persuaded them to remain committed while a search began for a new home. CHRS, largely through the efforts of Denny Monticelli, located and bought, for one million dollars, the old 1901 Pacific Telephone building in Alameda. In the past few years CHRS has created a radio history experience, one room and area at a time. CHRS called its new building “Radio Central,” because it was once the central phone exchange and it is on Central Ave, and following a long radio tradition (e.g., RCA) of naming large operating facilities as "Radio Central."

Related images tell a Tale of Two Buildings: On the left is the original telephone company building constructed in 1901. Sometime in the 1970s, a false-front was installed which covered the entrance which still exists behind the brick. The original entrance will be restored.

The Society’s technical areas include early wireless telegraphy from 1899, radiotelephone from 1902, broadcasting from 1912, amateur radio from 1903, television from the 1920s, military, marine and utility radio from 1899, international broadcasting from the late 1920s, phonographs, Hi-fi audio, televisions, and other devices used for sound and visual reproduction or transmission. The CHRS collections include hundreds of museum-quality related radios and other communications devices from the 20th century, many from local companies. These range from the earliest "crystal sets" to today's mobile smart-phones. CHRS presents both radio technology supplemented by radio programming as it was created for citizen and amateur audiences, to tell the stories of radio's development.

Related images show the interior of the Great Room: Left, how it looked in 1900 as the telephone exchange, and right, how it looked in July 2015 as the staging area for the CHRS July auction items. This room will eventually house the museum's exhibitions and rotating displays of exhibits.

The CHRS includes thousands of artifacts and archival items and books, and manages a number of programs. One of these is the Bay Area Radio Museum and Broadcasting Hall of Fame, a salute to the legendary radio personalities, stations and programming in the form of air-checks, photos and stories, all on-line. There is also the entire archives of The Society of Wireless Pioneers, stories about and from early twentieth century shipboard wireless telegraphy operators. The Society is the FCC-licensed trustee of amateur station, W6CF. This ham station operates and is used to teach communications skills and help interested persons obtain their licenses and get on the air.

As the various spaces are completed in the two-story building in Alameda, there is a complete shop for the teaching of classes in radio repair, and the restoration of wood cabinetry. When complete, there will be a radio museum featuring artifacts from early wireless telegraphy to the present day, all told as stories and much of it interactive. This may include a small theatre for live presentations and to continue classes in history and repair, a broadcast control room and studio for old radio re-creations adjacent to the Hall of Fame, an audio transfer service, and a museum store.

The Society is active in publication and reprints of classic radio books. The newest book (2019) is a compendium of historical television articles to accompany the new television exhibit. On line there several websites for the organization’s emphasis. For member-enthusiasts there are swap meets in the adjacent parking lot and two auctions each year, one of them at the annual Radio Day by the Bay. This features live music, food, awards, radio plays and other family-friendly fun. This is the major CHRS fund raiser and it has sustained its popularity. It is also a way for interested people to see the progress on the building, and to see CHRS evolve to a complete museum for all things radio.

CHRS as a historical society is dedicated to providing a forum for exchanging ideas and information on the history of radio and broadcasting, particularly in the West, with the emphasis on collecting, restoring and displaying vintage equipment, and related materials. CHRS is committed to the study of early radio and to the importance of this first wireless communications medium to the San Francisco Bay Area, California and the western states. The several hundred members of the organization have the knowledge needed to perpetuate the fascination for vintage radio. Members endeavor to communicate their knowledge to future generations, to foster the interest in collecting and preserving radios and to teach and publish the historical information that enhances those experiences. 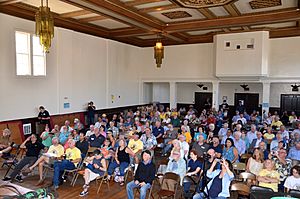 All content from Kiddle encyclopedia articles (including the article images and facts) can be freely used under Attribution-ShareAlike license, unless stated otherwise. Cite this article:
California Historical Radio Society Facts for Kids. Kiddle Encyclopedia.