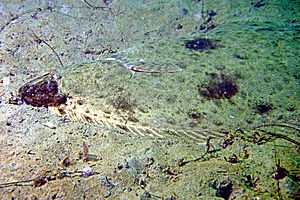 The California halibut or California flounder (Paralichthys californicus) is a large-tooth flounder native to the waters of the Pacific Coast of North America from the Quillayute River in Washington to Magdalena Bay in Baja California. It feeds near shore and is free swimming. It typically weighs 6 to 30 pounds (3 to 23 kg). It is much smaller than the larger and more northern-ranging Pacific halibut that can reach 300 pounds (140 kg).

This is an unusual fish in that one eye has to migrate around from one side to the other as it grows from an upright fry or baby fish into an adult fish that lies on its side. The adult has two eyes on the up-side as it lies on the bottom. Most flatfish are generally either right-eyed or left-eyed, but the California halibut is unusual in having a roughly even number of each type. Like other flatfish, the halibut hides under sand or loose gravel and blends into the bottom.

All content from Kiddle encyclopedia articles (including the article images and facts) can be freely used under Attribution-ShareAlike license, unless stated otherwise. Cite this article:
California halibut Facts for Kids. Kiddle Encyclopedia.