Anniella pulchra, the California legless lizard, is a limbless, burrowing lizard often mistaken for a snake. 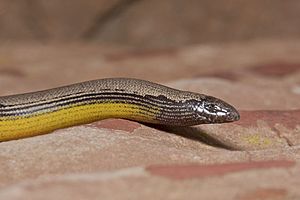 These lizards are around 7 inches (18 cm) long from snout to vent (not including tail). They have small, smooth scales typically colored silvery above and yellow below, although black or dark brown forms exist in Monterey County, California which were thought to be a separate subspecies at one point.

There were formerly two subspecies of California legless lizard recognized based on individual color morphs: the silvery legless lizard, A. p. pulchra, and the black legless lizard, A. p. nigra. However, contemporary taxonomy considers them simply a melanistic morph. More recently (in 2013), A. pulchra has been split up into five different species: A. pulchra (with a narrower definition), A. alexanderae, A. campi, A. grinnelli, and A. stebbinsi.

They live in loose, sandy soils or leaf litter, typically in sand dunes along the coast. They are found from Contra Costa County in northern California, all the way south to Baja California, although occurrences are often scattered. They require moisture to aid in shedding their skin. Without it, their vision and feeding can be affected, potentially starving the animal.

Males are slightly smaller than females, otherwise there is no discernible difference between the two sexes. Females are ovoviviparous and probably breed between early spring and July, with 1 to 4 young born September–November. Young lizards resemble their parents except look like smaller versions of them.

All content from Kiddle encyclopedia articles (including the article images and facts) can be freely used under Attribution-ShareAlike license, unless stated otherwise. Cite this article:
California legless lizard Facts for Kids. Kiddle Encyclopedia.