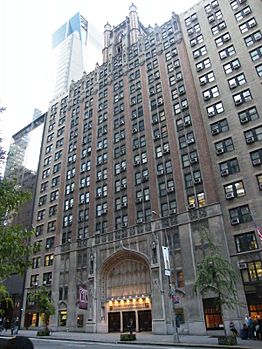 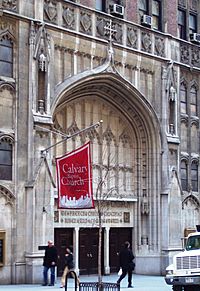 The "Gothic Tudor" entrance to the building

Calvary Baptist Church is located at 123 West 57th Street between the Avenue of the Americas (Sixth Avenue) and Seventh Avenue, near Carnegie Hall in Midtown Manhattan, New York City. It is an independent, non-affiliated church.

The church was founded in 1847, and its first sanctuary was at 50 West 23rd Street, completed in 1854. It then moved to a red sandstone Gothic church designed by John Rochester Thomas at its current location, which was built in 1883-1884. It also had a chapel at 223 West 67th Street, which was later used by St. Matthew's Roman Catholic Church.

The most recent building is an early example of an urban high-rise, or "skyscraper" church, a 16-story building which also included the Hotel Salisbury, an apartment hotel. Planning for the edifice began in 1929, with the design credited to the firm of Jardine, Hall & Murdock, and the building was dedicated in 1931. The church's two Steinway grand pianos were donated to the church by pianist Van Cliburn, who attended periodically while living in the hotel.

in 1923, Calvary was one of the earliest churches to operate its own radio station and has a long tradition of widely followed religious broadcasts. "Tell It From Calvary" is a radio show that the church still produces weekly; its heard on WMCA AM570.

Richard Nixon and Bill Clinton have worshipped at Calvary, Billy Graham and Billy Sunday have preached there.

In early 2020, Calvary Baptist Church and the Salisbury Hotel closed so demolition could begin and make way for a new building. The new building is anticipated to break ground in 2021. After completion, the new office building will include a new space for the church. Meanwhile, the church had met in alternative venues before New York's Covid-19 related social distancing requirements necessitated holding services and Bible studies via Facebook.

All content from Kiddle encyclopedia articles (including the article images and facts) can be freely used under Attribution-ShareAlike license, unless stated otherwise. Cite this article:
Calvary Baptist Church (Manhattan) Facts for Kids. Kiddle Encyclopedia.