Calycanthus floridus, or commonly known as the eastern sweetshrub, Carolina all spice, or spice bush, is a species of flowering shrub in the family Calycanthaceae. It is identifiable by its dark red flowers and fragrant scent. It is non-invasive and is found in the Southeastern United States region. The Nature Conservancy considers its conservation status to be G5, indicating it is at low risk of extinction.

Calycanthus floridus is a shrub that grows to be around 6 to 9 ft (2 to 3 m) tall. Its leaves are a dark green with a pale underside. They are ovate or elliptical in shape and grow to be about 6 inches in length. The leaves are simple, entire, and arranged oppositely along the stem.

The flowers are solitary, featuring a reddish brown to reddish purple color when they bloom in spring. They are aromatic and so are the leaves when bruised. The flowers have a hypanthium that is more than 2 cm (0.8 in) long. The shape of the flowers can be cylindrical, ellipsoid, pyriform, or globose. The flowers have numerous tepals that can either be oblong-elliptic or obovate-lanceolate at maturity. The flowers are perfect, having both stamens and carpels on the flowers. The stamens are numerous, connective beyond the anthers. The carpels are numerous. They are free, with a single ovary in a locule.

The fruits are indehiscent pseudocarps that are about 8 cm (3 in) in length and 5 cm (2 in) in diameter at maturity. They are formed within the receptacle and contain numerous achenes that are roughly 10 mm (0.4 in) long with a 5 mm (0.2 in) diameter. 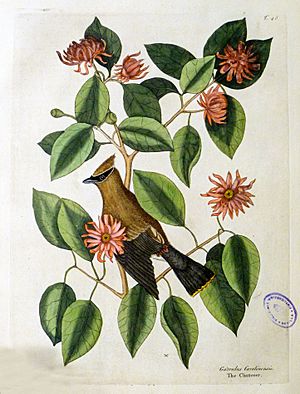 Oldest illustration, from a work by Mark Catesby published from 1731 onwards

Calycanthus floridus was first scientifically described by Carl Linnaeus in 1759. It was the only species in his new genus Calycanthus. Linnaeus referred to an earlier illustration by Mark Catesby, contained in a work published from 1731 onwards.

Calycanthus floridus is native to the eastern United States. It prefers sunny habitats but can tolerate moderate amounts of shade. It grows well in environments that feature moist substrate.

It is highly resistant to diseases and insects, although it is prone to infection by Agrobacterium tumefaciens, which leads to the formation of crown galls on the stems.

All content from Kiddle encyclopedia articles (including the article images and facts) can be freely used under Attribution-ShareAlike license, unless stated otherwise. Cite this article:
Calycanthus floridus Facts for Kids. Kiddle Encyclopedia.