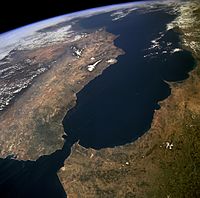 The Strait of Gibraltar as seen from space.

Natural Flow over the Camarinal Sill

Its formation is linked to the Zanclean flood and the termination of the Messinian salinity crisis, when the Mediterranean was abruptly refilled through the Gibraltar Strait, excavating the 900-metre-deep gorge that lies underneath the water. A competing hypothesis suggests that both the gorge and the Camarinal Sill are the result of fluvial erosion during the desiccation of the Mediterranean (Messinian salinity crisis).

Marine waters must climb to that depth when flowing between both ocean domains. During World War II, submarines used the upper inflow current and the lower outflow current to go in and out from the Mediterranean Sea without using their engines, to avoid being noticed from the surface.

All content from Kiddle encyclopedia articles (including the article images and facts) can be freely used under Attribution-ShareAlike license, unless stated otherwise. Cite this article:
Camarinal Sill Facts for Kids. Kiddle Encyclopedia.