The Camden Opera House Block is a historic multifunction building at 29 Elm Street in the center of Camden, Maine, United States. Built in 1893 after the town's great 1892 fire, it is one of its most prominent buildings. It houses town offices, a social meeting hall, and a 500-seat theater. The building was listed on the National Register of Historic Places in 1986.

The Camden Opera House Block is located near the southern end of Camden's downtown business district, opposite the town common on the southwest corner of Washington and Elm Streets, and within the Camden Great Fire Historic District. It is a rectangular brick three-story structure, with storefronts (now mostly occupied by town offices) on the ground floor, the theater and meeting spaces on the second floor, and a large social hall on the third floor. The exterior styling is Romanesque, with round-arch windows on the third floor of both street-facing facades, and the main entrance recessed in a round-arch opening on the Elm Street facade.

On November 19, 1892, a fire swept through downtown Camden, destroying a large number of wood-frame commercial structures, including the town offices, numerous fraternal meeting facilities, and the town's opera house. The Opera House was one of the most prominent buildings constructed in the wake of the fire, designed by Lewiston architect Elmer I. Thomas and completed in 1893. The building was designed to house not just town offices and the theater, but meeting spaces for local business organizations and the local post office, as well as two retail storefronts. Over the years, the town has taken over many of its spaces. The theater is used for town meetings, local productions of all types, and is one of the host sites of the Camden International Film Festival. 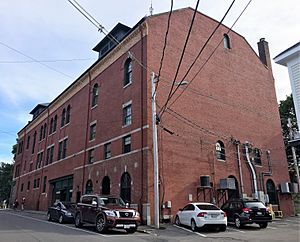 All content from Kiddle encyclopedia articles (including the article images and facts) can be freely used under Attribution-ShareAlike license, unless stated otherwise. Cite this article:
Camden Opera House Block Facts for Kids. Kiddle Encyclopedia.