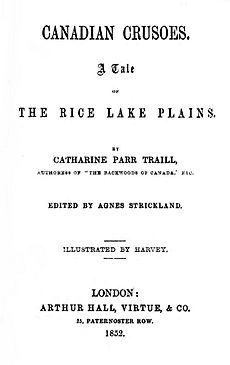 Canadian Crusoes: A Tale of the Rice Lake Plains is a novel by Catharine Parr Traill published in 1852, considered the first Canadian novel for children. Written after The Backwoods of Canada (1836), it is Traill's second Canadian book. It was first published in 1852 by London publisher Arthur Hall, Virtue, and Company. It was edited by her sister Agnes Strickland. 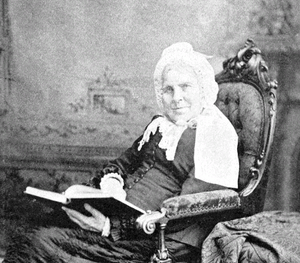 Catharine Parr Traill (1802–1899) was an English-born Canadian writer best known for he botanical book Canadian Wild Flowers (1865) as well as The Backwoods of Canada (1836) and The Canadian Settler's Guide (1855), works intended for an audience of potential English emigrants; Traill also published a large amount of fiction, beginning when she still lived in England and written in a didactive style.

Traill's Canadian works were amongst the first to have a Canadian setting and Canadian Crusoes was the first to feature a Canadian-born protagonist. Her sister and fellow emigrant Susanna Moodie also published fiction, but in an English setting following English conventions.

The work is set in what is today central southern Ontario, just south of Rice Lake, where three children become lost and must fend for themselves. Drawing from its namesake, Daniel Defoe's 1719 novel Robinson Crusoe, the novel sets out to show that these children, two English Canadian and one French Canadian, are able to work together to survive in the new world of Canada. This spirit of cooperation is emphasized by the fact that the children later meet a Mohawk girl who joins their group and is able to help them with her own skills.

All content from Kiddle encyclopedia articles (including the article images and facts) can be freely used under Attribution-ShareAlike license, unless stated otherwise. Cite this article:
Canadian Crusoes Facts for Kids. Kiddle Encyclopedia.