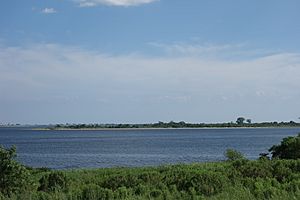 Canarsie Pol is an uninhabited island south of Canarsie, Brooklyn in Jamaica Bay, New York City. It is part of Gateway National Recreation Area. Canarsie Pol is an irregular oval of about 300 acres (120 ha) (17,050,000 square feet (1,584,000 m2)). On 1910 maps, the island was originally much smaller; however, when nearby waterways were dredged to expand them for improved navigation, the sand and soil were piled on Canarsie Pol. Near the island are other islands and marshes in the bay. Canarsie Pol has an elevation of 10 feet (3.0 m), and is a popular destination for kayakers embarking from the Canarsie Pier.

All content from Kiddle encyclopedia articles (including the article images and facts) can be freely used under Attribution-ShareAlike license, unless stated otherwise. Cite this article:
Canarsie Pol Facts for Kids. Kiddle Encyclopedia.