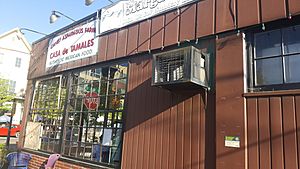 Canby Asparagus Farm has been owned by Charles Maes and family since 1991. The business has staffed booths at the Milwaukie Farmers Market and others in the region. Maes' son Brandon opened Casa de Tamales in November 2007.

In 2018, a 10-foot tall, 400-pound boot sculpture displayed on the building's exterior for decades was stolen. Like many other restaurants, Casa de Tamales operated at limited capacities during the COVID-19 pandemic. Maes spoke out against some of the restrictions.

All content from Kiddle encyclopedia articles (including the article images and facts) can be freely used under Attribution-ShareAlike license, unless stated otherwise. Cite this article:
Canby Asparagus Farm and Casa de Tamales Facts for Kids. Kiddle Encyclopedia.