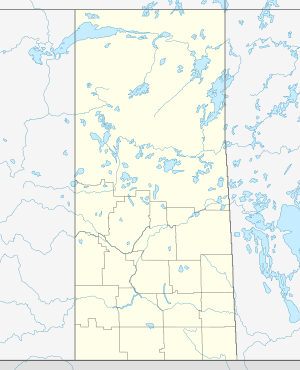 Cannington Manor Provincial Park is a historic park which was established in 1882 by Captain Edward Michell Pierce (died June 20, 1888) as an aristocratic English colony. Cannington Manor is located west and north of Saskatchewan Highway 603. 5 townships The Colony is 16 kilometres southeast of Moose Mountain Provincial Park, and 60 km (37 mi) south of Moosomin.

Captain Pierce established an agricultural college and attracted remittance men as students for £100 a year. The intention of the college was to instruct these bachelor sons of wealthy families to farm and homestead in the last best west. The brothers Ernest, Billy and Bertie Beckton constructed "Didsbury", ranch house within Cannington Manor colony.

The cultural and recreational life emulated English upper class society. Thoroughbred racing, polo matches, theatrical plays, fox hunting, billiards, soccer and tennis were all enjoyed by the colony students and settlers. This was a contrast to the neighbouring homesteaders who were barely eking out a living proving their land and making improvements to earn land title grants from the Dominion Government.

Captain Pierce, the founder of the community died on June 20, 1888. C.E. Phipps established the land titles office here in 1889 and moved to Oxbow in 1891. Spencer Page was the colony's first teacher in 1889 before turning to politics in 1894. Louis Kent the second teacher in Cannington Manor started his duties in 1894 and passed on in 1896. Robert Bird the Moose Mountain trading company store keeper moved to B.C. in 1898. Ernest Maltby postmaster and his wife Mary arrived in 1892 moved in 1901 to B.C.

In 1901 - 1902 the CPR regional branch line was constructed 10 km (6.2 mi) south of the village rather than through the village. During a time of travel by horseback this distance was detrimental to the growth of the community. The passing of the founder, a few years earlier, a drought and low grain prices soon made it unfeasible for settlers to continue the lifestyle at Cannington Manor.

All content from Kiddle encyclopedia articles (including the article images and facts) can be freely used under Attribution-ShareAlike license, unless stated otherwise. Cite this article:
Cannington Manor Provincial Park Facts for Kids. Kiddle Encyclopedia.