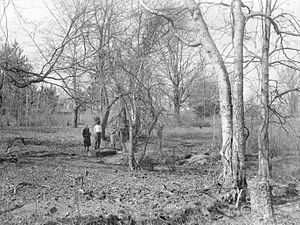 Shackleford Spring in Cannonsburg, where Andrew Jackson's weary troops camped and refreshed themselves while marching against the British during the War of 1812.

Bethel Church was established in Cannonsburg in 1804, the first Presbyterian Church in the Mississippi Territory. A Mississippi historic plaque recognizing Joseph Bullen, the church's founder, is located east of the settlement.

Richard Harrison owned a plantation in Cannonsburg which by 1860 had 38 slaves.

The Bethlehem Baptist Church was organized in Cannonsburg in 1860, and served the community's freed blacks and ex-slaves. The Church held a prominent position in Jefferson County's social, religious, and civic life. During the 1960s, the church held the first civil rights mass meeting in Jefferson County.

Cannonsburg was a stop on the Natchez, Jackson and Columbus Railroad, which began operating in the 1870s.

An oil field known at the Cannonsburg Field is located north of the settlement.

All content from Kiddle encyclopedia articles (including the article images and facts) can be freely used under Attribution-ShareAlike license, unless stated otherwise. Cite this article:
Cannonsburg, Mississippi Facts for Kids. Kiddle Encyclopedia.