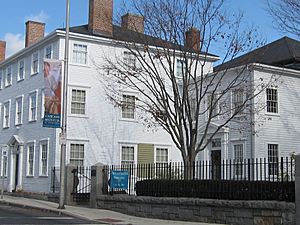 Cape Ann Museum is located in Gloucester, Massachusetts. Its collection focuses mainly on artists and artist colonies from the Cape Ann area of the state, and the history of Gloucester as a fishing and trading port.

The museum was founded in 1875 as the Cape Ann Scientific and Literary Association. The present name was adopted in 2007.

Captain Elias Davis House, built in 1804 by a successful sea captain, contains much of the Museum's furniture and decorative arts collection. Many of the objects in the house belonged to Elias Davis and his descendants. The house is adjacent to the main museum galleries and 6 of the 12 rooms are open to the public.

All content from Kiddle encyclopedia articles (including the article images and facts) can be freely used under Attribution-ShareAlike license, unless stated otherwise. Cite this article:
Cape Ann Museum Facts for Kids. Kiddle Encyclopedia.