The Cape Bruny Lighthouse is an inactive lighthouse located at the southern tip of Bruny Island, Tasmania, Australia. 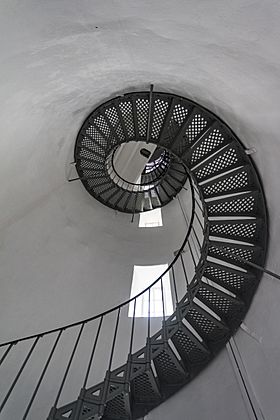 It is the second oldest extant lighthouse tower in Australia, as well as having the longest (158 years) history of being continuously manned. It was first lit in March 1838 and was eventually decommissioned on 6 August 1996.

The project was commissioned by Governor George Arthur in 1835 after a series of shipwrecks south of Bruny Island and construction began in April 1836. The lighthouse was built by convict labour using locally quarried dolerite over two years. When first lit in March 1838 it was Tasmania's third lighthouse and Australia's fourth.

In December 2000 the light station area, including the lighthouse, became part of the South Bruny National Park. The lightstation was maintained by a permanent caretaker until 2011 when the Parks & Wildlife established a rotational volunteer caretaker program. Volunteers live on-site in the caretakers cottage for four-week periods, assisting with repairs and general maintenance.

In June 2012, the Tasmanian government sought expressions of interest from commercial operators wishing to take over the operation and management of the Cape Bruny Light Station. No tender was awarded and the site is managed by the Parks & Wildlife Service with assistance from volunteers. Following the tender process, only one company began tours of the South Bruny National Park and Cape Bruny Light Station that takes tourists to visit the Cape Bruny Lightstation - Bruny Island Safaris The latter, Bruny Island Safaris, also operates tours inside the lighthouse tower.

An active light tower is located nearby on a fiberglass construction of 4 metres (13 ft) height. Its light characteristic is "Fl. 10 s", i.e. a white flash every 10 seconds. The lightsource emits from a focal plane at 93 metres (305 ft) above sea level.

All content from Kiddle encyclopedia articles (including the article images and facts) can be freely used under Attribution-ShareAlike license, unless stated otherwise. Cite this article:
Cape Bruny Lighthouse Facts for Kids. Kiddle Encyclopedia.