Cape Clear is a small town located in Victoria, Australia. Cape Clear has a hotel and a general store. The town is close to the Woady Yaloak River. The area was once vibrant during the gold rush in the 19th century. Cape Clear Post Office opened on 17 April 1865. It is now largely dependent on farming. 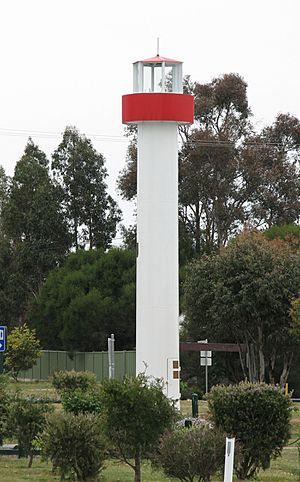 Cape Clear was named by Irish goldminers who originated from Cape Clear in Ireland. Despite its name, it is about 100 kilometres from the coast. A 13 metre high model lighthouse with a working light was constructed near the hotel in 2008 to create a local landmark.

The Cape Clear Cast Iron Mileposts, located on Lismore-Scarsdale Road and Rokewood-Skipton Road, are listed on the Victorian Heritage Register.

All content from Kiddle encyclopedia articles (including the article images and facts) can be freely used under Attribution-ShareAlike license, unless stated otherwise. Cite this article:
Cape Clear, Victoria Facts for Kids. Kiddle Encyclopedia.