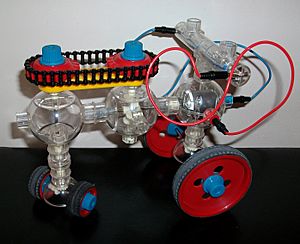 This model, created with the Capsela 250 Science Discovery Kit, has a swivel above the small wheels that allows it to sometimes turn itself around after running into an obstacle.

Capsela is a construction toy brand consisting primarily of gears and motors in spherical plastic capsules that can be connected to form various static or dynamic toys suitable for land or water. The capsules typically have six hollow octagonal connectors protruding, where an octagonal sleeve piece bridges between two capsules. The hollow connection pegs on a capsule can have electrical or rotary adapters inside, reaching into the next capsule. There are electric motor capsules, gear capsules, switch capsules, pontoon capsules, and others; there are also battery holders, wheels, propellers, impellers, lights, wires, and miscellaneous supporting pieces.

Capsela products were originally manufactured by the Mitsubishi Pencil Company. The series was then licensed out to Play Jour and has since been produced by VTech, Kidology, and other subsidiaries. The range seems to have been re-released in Japan by Bandai, adding new colors to the basic range of transparent spheres. In the U.S., the Capsela line was purchased by Educational Insights, a manufacturer of learning toys and educational materials for school classroom, which has discontinued the line.

Capsela has been relaunched as IQ Key. Although the capsules are now polyhedral rather than spherical, the new products are compatible with the original Capsela.

Capsela products were originally sold in at least four ranges:

In January 1987, Access Software announced The Robotic Workshop, a kit designed for home computers that used a range of Capsela parts. The kit includes more than 50 Capsela parts, including two motors, gears, wheels, and sensors. The kit also includes an electronic control unit that plugs into the user port of a Commodore 64, an instruction manual with 50 tutorial projects, and special programming software on a floppy disk. It was later released for Apple, Atari, and IBM computers.

All content from Kiddle encyclopedia articles (including the article images and facts) can be freely used under Attribution-ShareAlike license, unless stated otherwise. Cite this article:
Capsela Facts for Kids. Kiddle Encyclopedia.