Capsella bursa-pastoris, known as shepherd's purse because of its triangular flat fruits, which are purse-like, is a small annual and ruderal flowering plant in the mustard family (Brassicaceae). It is native to eastern Europe and Asia minor, but is naturalized and considered a common weed in many parts of the world, especially in colder climates, including British Isles, where it is regarded as an archaeophyte, North America and China, but also in the Mediterranean and North Africa. C. bursa-pastoris is the second-most prolific wild plant in the world, and is common on cultivated ground and waysides and meadows.

Scientists have referred to this species as a 'protocarnivore', since it has been found that its seeds attract and kill nematodes as a means to locally enrich the soil. 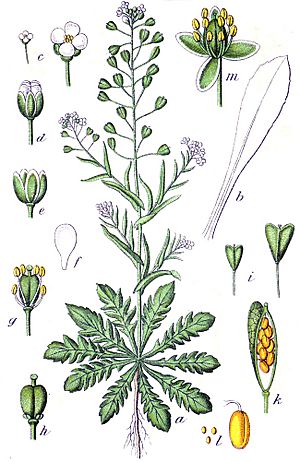 Capsella bursa-pastoris plants grow from a rosette of lobed leaves at the base. From the base emerges a stem about 0.2–0.5 m (0.66–1.64 ft) tall, which bears a few pointed leaves which partly grasp the stem. The flowers, which appear in any month of the year in the British Isles, are white and small, 2.5 mm (0.098 in) in diameter, with four petals and six stamens. They are borne in loose racemes, and produce flattened, two-chambered seed pods known as siliques, which are triangular to heart-shaped, each containing several seeds.

Like a number of other plants in several plant families, its seeds contain a substance known as mucilage, a condition known as myxospermy. Recently, this has been demonstrated experimentally to perform the function of trapping nematodes, as a form of 'protocarnivory'

Capsella bursa-pastoris is closely related to the model organism such as Arabidopsis thaliana and is also used as a model organism, due to the variety of genes expressed throughout its life cycle that can be compared to genes that are well studied in A. thaliana. Unlike most flowering plants, it flowers almost all year round. Like other annual ruderals exploiting disturbed ground, C. bursa-pastoris reproduces entirely from seed, has a long soil seed bank, and short generation time, and is capable of producing several generations each year.

It was formally described by the Swedish botanist Carl Linnaeus in his seminal publication Species Plantarum in 1753, and then published by Friedrich Kasimir Medikus in Pflanzen-Gattungen (Pfl.-Gatt.) on page 85 in 1792.

William Coles wrote in his book, Adam in Eden (1657), "It is called Shepherd's purse or Scrip (wallet) from the likeness of the seed hath with that kind of leathearne bag, wherein Shepherds carry their Victualls [food and drink] into the field."

In England and Scotland, it was once commonly called 'mother's heart', which is derived from a child's game/trick of picking the seed pod, which then would burst and the child would be accused of 'breaking his mother's heart'.

Capsella bursa-pastoris gathered from the wild or cultivated has many uses, including for food, to supplement animal feed, for cosmetics, and in traditional medicine—reportedly to stop bleeding. The plant can be eaten raw; the leaves are best when gathered young. Native Americans ground it into a meal and made a beverage from it.

It is cultivated as a commercial food crop in Asia. In China, where it is known as jìcài (荠菜; 薺菜) it is commonly used in food in Shanghai and the surrounding Jiangnan region. It is stir-fried with rice cakes and other ingredients or as part of the filling in wontons. It is one of the ingredients of the symbolic dish consumed in the Japanese spring-time festival, Nanakusa-no-sekku. In Korea, it is known as naengi (냉이) and used as a root vegetable in the characteristic Korean dish, namul (fresh greens and wild vegetables).

Shepherd's purse was used as a pepper substitute in colonial New England.

Fumaric acid is one chemical substance that has been isolated from C. bursa-pastoris.

Parasites of this plant include:

All content from Kiddle encyclopedia articles (including the article images and facts) can be freely used under Attribution-ShareAlike license, unless stated otherwise. Cite this article:
Capsella bursa-pastoris Facts for Kids. Kiddle Encyclopedia.