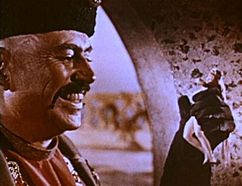 Captain Sindbad is a 1963 independently made fantasy and adventure film, produced by Frank King and Herman King (King Brothers Productions), directed by Byron Haskin, that stars Guy Williams and Heidi Brühl. The film was shot at the Bavaria Film studios in Germany and was distributed by Metro-Goldwyn-Mayer.

The screenplay was rewritten by Guy Endore, then rewritten again by co-producer Frank King a week before filming began in order to reduce production expenses; the film was reedited again prior to release. Haskin also shot some of the film's special effects sequences for an MGM Television television pilot, but no network picked it up.

The peaceful kingdom of Baristan is ruled by the evil El Kerim. He plans to capture his rival, Sindbad, who will soon return from a voyage to marry Princess Jana. The Princess convinces the magician Galgo to turn her into a Firebird, so that she may fly off to warn Sinbad of the trap set for him. She is able to do so just as Galgo is discovered by the guards, who take him to El Kerim. As Sindbad and his crew sail towards Baristan, the Princess/Firebird lands on the ship.

Before she can deliver the message, however, El Kerim has his guards transformed into giant human falcons, which manage to sink Sinbad's ship using large rocks. Sindbad and some of his crew survive the attack and carefully make their way ashore. Galgo stretches out his arm over an enormous distance in order to steal El Kerim's magic ring. El Kerim, however, wakes up in time and burns Galgo's hand.

Sindbad, posing as a petty thief, is arrested and must appear before the evil ruler. El Kerim is not fooled by the pretense and orders him to be executed. Sinbad breaks free and stabs him directly in the heart with a sword, but El Kerim cannot be killed. He orders Sindbad be put to death in the public arena the next day.

Sindbad must now do battle with "The Thing", a fearsome giant invisible creature. Fortunately, The Thing knocks over a torch in his pursuit, starting a large fire, inciting a mass exodus of the large crowd, which allows Sindbad to escape from the arena during the confusion.

Sindbad goes to Galgo and finally convinces the magician to reveal El Kerim's secret: the evil ruler had his vulnerable heart removed, and it is now kept safe in a distant bell tower, guarded by supernatural forces. In the meantime El Kerim insists that the Princess marry him, but when she finally refuses, he orders her to be executed with Sindbad when he is recaptured. Sindbad and his men must traverse a swamp of horror in order to reach the tower containing the evil heart. On the way, they encounter carnivorous vines, giant prehistoric crocodiles, volcanic lava pits, and killer whirlpools. Their numbers reduced, they finally arrive at the tower, where they dispatch a huge ogre with the multiple heads of a dragon.

Sindbad, with the aid of a hook, begins climbing the tower's immense bell rope. When he reaches the top, he discovers El Kerim's beating heart is encased in crystal. The heart is protected by a giant hand, which chases Sindbad until he throws the hook at the crystal, dislodging the evil heart, giving El Kerim a heart attack. Seeking to protect his vulnerable heart, El Kerim rapidly flies with Galgo in his winged chariot to the tower. Sindbad is about to impale the heart when El Kerim arrives. A fierce sword fight between them begins. Galgo steals the heart and tosses it over the side of the tower and it explodes! As it falls to the ground, El Kerim dies, and falls from the tower's edge to his death. Later, the entire kingdom celebrates the marriage of Captain Sindbad and Princess Jana.

All content from Kiddle encyclopedia articles (including the article images and facts) can be freely used under Attribution-ShareAlike license, unless stated otherwise. Cite this article:
Captain Sindbad Facts for Kids. Kiddle Encyclopedia.