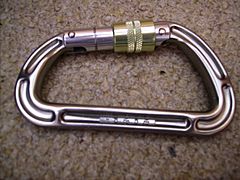 A carabiner is a metal loop, which can be opened on one side. This side is called a gate. The other side is called spine. Carabiners are often used for rock climbing, sailing and canoeing. They also are used for construction of high buildings or window cleaning. The word comes from the German word "Karabinerhaken", which means "hook for a carbine".

Climbing carabiners are very strong. Many can hold loads greater than 20 kN. When belaying a climber, using a belay device (such as a Grigri or an ATC), a carabiner with a locking feature must be used to prevent the carabiner from opening accidentally.

An ATC locked into a D-type carabiner

All content from Kiddle encyclopedia articles (including the article images and facts) can be freely used under Attribution-ShareAlike license, unless stated otherwise. Cite this article:
Carabiner Facts for Kids. Kiddle Encyclopedia.