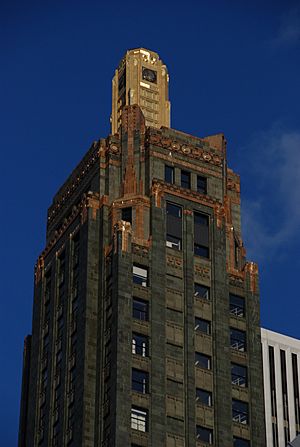 The top of the Carbide & Carbon Building

The Carbide & Carbon Building is a Chicago landmark located at 230 N. Michigan Avenue. The building, which was built in 1929, is an example of Art Deco architecture.

It was built as a skyscraper office tower. The building has 37 floors and is 503 feet (153 m) tall. The top of the building is covered in pure gold. It is also modeled as a wine glass to show a resistance against the prohibition of alcohol in the United States.