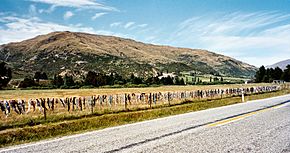 The Bra Fence in December 2002

The Cardrona Bra Fence is a controversial tourist attraction in Central Otago, in New Zealand. At some point between 1998 and 1999, passers-by began to attach bras to a rural fence. The fence gradually became a well known site as the number of bras grew to hundreds. The fence is located on a public road reserve, adjacent to farm property in the Cardrona Valley area southwest of Wanaka, near to Cardrona.

Despite its popularity, there has been disagreement over the value of the attraction. The bra fence stands today next to the Cardrona Distillery.

The Bra Fence began at some point between Christmas 1998 and New Year 1999, when four bras were attached to the wire fence alongside the road. The original reason for the bras being attached to the fence is unknown. News spread of the addition, which was left on the fence by the local landowners, and more bras began to appear. By the end of February there were some 60 bras, but at about this time they were all removed anonymously. This was reported in the local press, and the story gained widespread dissemination through the New Zealand media, leading to more bras appearing. 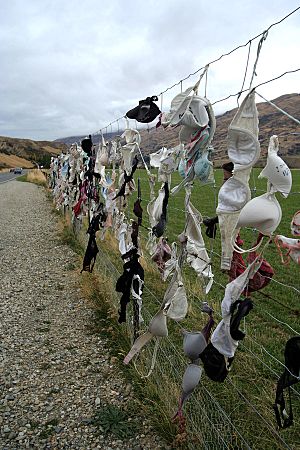 All content from Kiddle encyclopedia articles (including the article images and facts) can be freely used under Attribution-ShareAlike license, unless stated otherwise. Cite this article:
Cardrona Bra Fence Facts for Kids. Kiddle Encyclopedia.