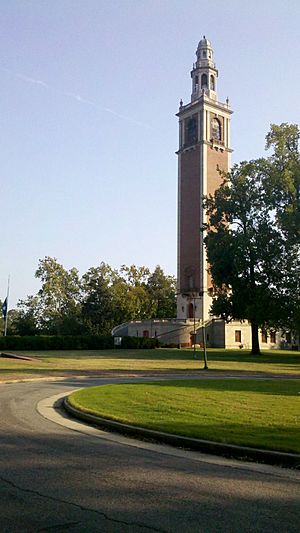 The Carillon tower, after which the community is named

Carillon is a neighborhood in the West End of Richmond that is situated in between Virginia State Routes 146 and 161. Adjacent to Maymont and Byrd Park, the upper-class neighborhood is home to the Dogwood Dell Amphitheater. Pump House Drive and Rugby Road are the artieries of the southern tier of the community, while Douglasdale Avenue and South Belmont Drive form the spin of the northern portions of Carillon.

The neighborhood is named after the Carillon tower in Richmond (built 1932), which is the 20th-tallest structure in the city limits.

All content from Kiddle encyclopedia articles (including the article images and facts) can be freely used under Attribution-ShareAlike license, unless stated otherwise. Cite this article:
Carillon, Richmond, Virginia Facts for Kids. Kiddle Encyclopedia.