Carleton-sur-Mer is the fifth largest town of the Gaspésie's south shore, in southeastern Quebec, Canada, located on Route 132, along the Baie des Chaleurs.

The town's territory includes the communities of Biron, Caps-de-Maria, Carleton, Robitaille, and Saint-Omer. 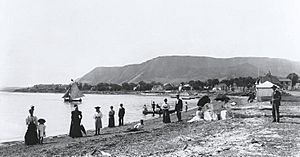 Around 1756, 7 families of exiled Acadians arrived in Tracadigash from Bonaventure and Restigouche following their deportation from Beaubassin, Nova-Scotia, in 1755. Charles Dugas and Benjamin LeBlanc (both from Grand Pré) were the original founders. In 1772 Abbé Joseph-Mathurin Bourg, first accredited Acadien priest, arrived from Quebec City. He conducted the very first census of Tragadigash (recensement Tracadigache 1777) where he listed the following family names: Allard, Allain, Arseneau, Aubertin, Barriot, Bergeron, Berthelot, Boudreau, Bujold, Comeau, Cormier, Dugas, Francis, Landry, Leblanc, Poirier, Richard; totalling 177 persons. A later three page correspondence to the governor, dated 7 April 1784, stated described land use "Endorsed: A list of the inhabitants of Tracadigache and the quantity of land each inhabitant has improved" which averaged 3 to 12 arpents per man.

In 1787, American Loyalists found their way to Tracadigash which eventually resulted in the parish changing its name from Saint-Joseph de Tracadièche (Tracadièche is the French spelling of Tragadigash) to Saint-Joseph de Carleton in honour of General Guy Carleton.

On October 4, 2000, the municipalities of Carleton and Saint-Omer were reunited after 100 years of separation and the new town thus formed was called Carleton–Saint-Omer.

On May 7, 2005, the name was officially changed to Carleton-sur-Mer.

After the arrival of the first Acadians in 1756, the territory of Saint-Omer was included in the Parish of Saint Joseph de Tracadièche and had a common history with Carleton. As more of the population shifted west, numbers eventually justified creating a new parish, and in 1899 the Parish of Saint-Omer came to be, approved by the government in 1902.

For 100 years, Saint-Omer functioned as a distinct parish and municipality. Its economy depended largely on fishing, agriculture and forestry. Saint-Omer had its own elementary schools but its teenagers attended Carleton's École Polyvalente (renamed École Antoine-Bernard in 1983).

On October 4, 2000, the municipalities of Saint-Omer and Carleton were united and named Carleton-Saint-Omer.

The small agricultural and forestry village of Saint-Louis de Gonzague, 8 kilometers north of Saint-Omer, was established by the Government of Quebec to encourage economic development. The Biron section was shut down by the Quebec government in 1972. Five people remained residents of the village to work the land. In 2002, the Gaspé union paysanne held its yearly Fête de l'union paysanne gaspésienne there.

The École Antoine Bernard high school and its students were the subject of the 2014 documentary film, Guidelines.

All content from Kiddle encyclopedia articles (including the article images and facts) can be freely used under Attribution-ShareAlike license, unless stated otherwise. Cite this article:
Carleton-sur-Mer Facts for Kids. Kiddle Encyclopedia.