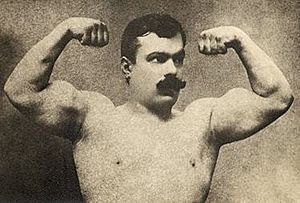 Airoldi was born in Origgio, near Saronno. He competed in sporting contests in the Varese. Later, he competed at the national and international level. In 1892, he won the Lecco-Milano and the Milano-Torino. He became famous very quickly. He was one of the best marathon runners of his time. In September 1895, he won the Milano-Barcellona marathon. He won 2000 pesetas for his victory.

Airoldi wanted to participate in the 1896 Summer Olympics in Athens, Greece. But, he did not have many to get to Athens. He received some money from La Bicicleta, a popular magazine of the time. Airoldi decided to run his way to Athens. He would need to cover seventy kilometres a day to arrive on time. The magazine covered the stages of his journey. They also provided him with food and water.

Airoldi first went from Milan to Split, with no problems. In the next stage, Airoldi planned to run along the Croatian coast through Kotor and Corfu. However, he fell and hurt his hand during the journey. He had to spend two days resting himself. He was told not to cross Albania on foot. He decided to take an Austrian boat to Patras. Then, he would go to Athens on foot.

Back in Italy, Airoldi tried to beat Spiridon Louis's record. He did not succeed. He continued to race in Lombardy and Switzerland. After he finished racing, he moved to South America.

All content from Kiddle encyclopedia articles (including the article images and facts) can be freely used under Attribution-ShareAlike license, unless stated otherwise. Cite this article:
Carlo Airoldi Facts for Kids. Kiddle Encyclopedia.