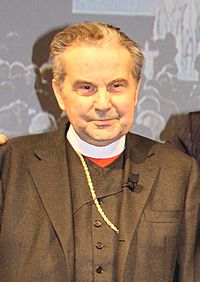 Carlo Caffarra (1 June 1938 – 6 September 2017) was an Italian cardinal and Roman Catholic Archbishop of Bologna. He was created Cardinal in the consistory of 24 March 2006 by Pope Benedict XVI. He was born in Busseto, Italy.

Caffarra died on 6 September 2017 in Bologna, Italy of brain cancer at the age of 79.

All content from Kiddle encyclopedia articles (including the article images and facts) can be freely used under Attribution-ShareAlike license, unless stated otherwise. Cite this article:
Carlo Caffarra Facts for Kids. Kiddle Encyclopedia.