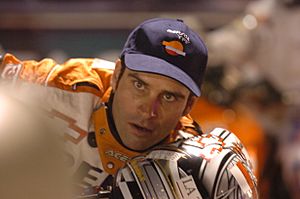 Carlo Alberto de Gavardo Prohens (14 July 1969 – 4 July 2015) was a Chilean motorist and motorcyclist. He has participated in numerous rallies worldwide, including the Dakar Rally and Rallye des Pharaons. He was the first Chilean motorcyclist to run the Paris-Dakar from beginning to end.

All content from Kiddle encyclopedia articles (including the article images and facts) can be freely used under Attribution-ShareAlike license, unless stated otherwise. Cite this article:
Carlo de Gavardo Facts for Kids. Kiddle Encyclopedia.