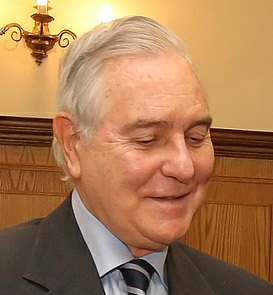 José Carlos Dívar Blanco (December 31, 1941 – November 11, 2017) was a Spanish government official. He was born in Málaga, Spain. He was President of the General Council of the Judiciary and the Supreme Court from September 2008 to June 2012.

He was the President of the National Court from 2001 to 2008. He resigned in June 2012 when it was uncovered a scandal of alleged misappropriation of public funds.

All content from Kiddle encyclopedia articles (including the article images and facts) can be freely used under Attribution-ShareAlike license, unless stated otherwise. Cite this article:
Carlos Dívar Facts for Kids. Kiddle Encyclopedia.