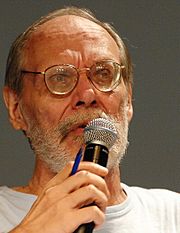 Carlos Oscar Reichenbach Son (14 June 1945 – 14 June 2012) was a Brazilian filmmaker who is known for his movies such as; Dream of Life, Forbidden Paradise, City Life, and Look and Feel.

All content from Kiddle encyclopedia articles (including the article images and facts) can be freely used under Attribution-ShareAlike license, unless stated otherwise. Cite this article:
Carlos Reichenbach Facts for Kids. Kiddle Encyclopedia.