The Carlowville Historic District is a historic district in the community of Carlowville, Alabama. The historic district covers 780 acres (320 ha) and is centered on Alabama State Route 89 and Dallas County roads 4, 47 and 417. It was placed on the National Register of Historic Places on January 18, 1978. 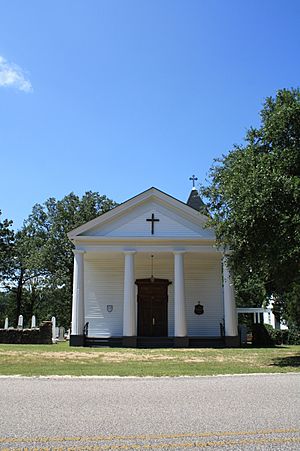 The Carlowville Historic District was nominated to the National Register as a "pleasant blending of nineteenth and twentieth century architecture in quiet, rural environment." The earlier buildings are predominantly wood-frame structures. They range from elegant mansions to plain folk houses. Some of the homes continue to be owned by descendants of the original builders who came here from the Atlantic seaboard nearly 200 years ago.

Several of the more substantial houses were built atop brick basements. Two of these structures had their original brick ground floor removed and were subsequently lowered during the twentieth century. Architectural historians have attributed this to dampness and the poor quality of the local brick.

All content from Kiddle encyclopedia articles (including the article images and facts) can be freely used under Attribution-ShareAlike license, unless stated otherwise. Cite this article:
Carlowville Historic District Facts for Kids. Kiddle Encyclopedia.