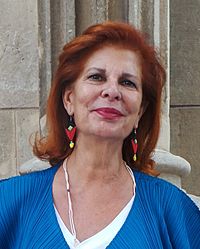 Carmen Alborch Bataller (31 October 1947 – 24 October 2018) was a Spanish politician and writer. She was born in Castelló de Rugat, Valencia, Spain. She was a member of the Spanish Socialist Workers' Party. Alborch was Minister of Culture from 1993 to 1996 in the last government of Felipe González.

In 1996, Alborch was elected to the Congress of Deputies, representing Valencia. She chaired the Committee of Control of RTVE (the state radio and TV corporation) from 1996 until January 2000.

Alborch died at the age of 70 on 24 October 2018 from pancreatic cancer in Valencia.

All content from Kiddle encyclopedia articles (including the article images and facts) can be freely used under Attribution-ShareAlike license, unless stated otherwise. Cite this article:
Carmen Alborch Facts for Kids. Kiddle Encyclopedia.