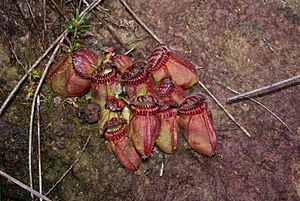 Australia has one of the world's richest carnivorous plant floras, with around 187 recognised species from 6 genera.

The following list is derived from Australian Carnivorous Plants (2012) by Greg Bourke and Richard Nunn. It notably excludes the genus Stylidium, whose members may be considered to be protocarnivorous or carnivorous because the glandular trichomes that cover the scape and flower can trap, kill, and digest small insects with protease enzymes produced by the plant.

All content from Kiddle encyclopedia articles (including the article images and facts) can be freely used under Attribution-ShareAlike license, unless stated otherwise. Cite this article:
Carnivorous plants of Australia Facts for Kids. Kiddle Encyclopedia.