The Nepenthes, often known as Tropical Pitcher Plants or Monkey Cups, are a genus of carnivorous plants in the family of the Nepenthaceae consisting of about 120 species (this number is fast increasing, with one to two new species being described each year). Many hybrids exist, both natural and created by humans.

These plants come from South China, Indonesia, Malaysia and the Philippines; westward to Madagascar and the Seychelles ; southward to Australia and New Caledonia ; and northward to India and Sri Lanka . 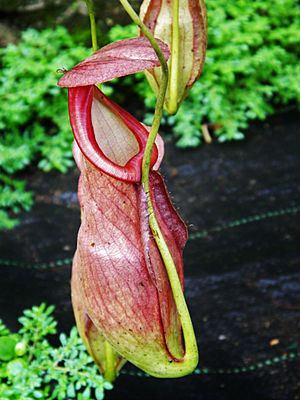 Nepenthes mirabilis at the Periyar Tiger Reserve, in Southern Western Ghats of India

Nepenthes species usually consist of a shallow root system and a prostrate or climbing stem, often several metres long and up to 15 m (49 ft) or more.

From the stems arise alternate, sword-shaped leaves with entire leaf margins. An extension of the midrib (the tendril), which in some species aids in climbing, protrudes from the tip of the leaf; at the end of the tendril the pitcher forms. The pitcher starts as a small bud and gradually expands to form a globe- or tube-shaped trap. The shapes can evoke a champagne flute or a condom. 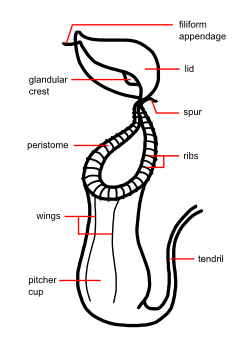 Basic structure of an upper pitcher

The trap contains a fluid of the plant's own production, which may be watery or thicker, and is used to drown the prey.

The lower part of the trap contains glands which absorb nutrients from captured prey.

Along the upper inside part of the trap is a slick, waxy coating which makes the escape of its prey nearly impossible. Surrounding the entrance to the trap is a structure called the peristome (the "lip"), which is slippery and often quite colorful, attracting prey, but offering an unsure footing. The prey-capture effectiveness is further enhanced in moist environments, where condensation may cause a thin water film to form on the surface of the peristome so the insects slip and fall, into the pitcher. Above the peristome is a lid (the operculum); in many species, this keeps rain from diluting the fluid within the pitcher, the underside of which may contain nectar glands which attract prey.

Nepenthes species usually produce two types of pitchers, known as leaf dimorphism. Appearing near the base of the plant are the large, lower traps, which typically sit on the ground. The upper or aerial pitchers are usually larger, coloured differently, and possess different features from the lower pitchers. These upper pitchers usually form as the plant reaches maturity and the plant grows taller. To keep the plant steady, the upper pitchers often form a loop in the tendril, allowing it to wrap around nearby support.

Prey usually consists of insects, but the largest species may occasionally catch small vertebrates, such as rats and lizards. There are even records of cultivated plants trapping small birds.

Flowers occur in racemes or more rarely in panicles with male and female flowers on separate plants. They are insect-pollinated, the primary agents being flies (including blow flies, midges, and mosquitoes), moths, wasps, and butterflies.

Their smells can range from sweet to musty or fungus-like. Seed is typically produced in a four-sided capsule which may contain 50–500 wind-distributed seeds, consisting of a central embryo and two wings, one on either side.

All content from Kiddle encyclopedia articles (including the article images and facts) can be freely used under Attribution-ShareAlike license, unless stated otherwise. Cite this article:
Nepenthes Facts for Kids. Kiddle Encyclopedia.