There are fourteen species of carnivorous plants occurring in New Zealand, and four species that have been known to occur in the past. 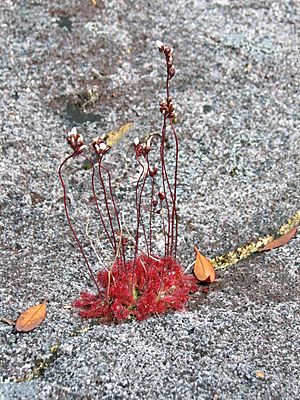 Drosera burmanni, D. filiformis, U. arenaria and U. sandersonii have been known to occasionally occur.

Drosera capensis, U. arenaria, U. gibba, U. livida and U. sandersonii are listed on the National Pest Plant Accord since they are invasive species. The Cape sundew (D. capensis) and bladderwort (U. livida) have been found in the Auckland region and pose a threat to indigenous plants.

All content from Kiddle encyclopedia articles (including the article images and facts) can be freely used under Attribution-ShareAlike license, unless stated otherwise. Cite this article:
Carnivorous plants of New Zealand Facts for Kids. Kiddle Encyclopedia.