Drosera filiformis, commonly known as the thread-leaved sundew, is a small, insectivorous, rosette-forming species of perennial herb. A species of sundew, it is unusual within its genus in that the long, erect, filiform (thread-like) leaves of this plant unroll in spirals – an arrangement similar to the circinate vernation seen in ferns.

D. filiformis occurs naturally in both Canada and the United States; its natural range extends down the eastern seaboard of North America from south western Nova Scotia in the north down through New England to Florida in the south. 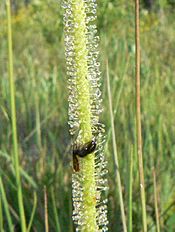 All content from Kiddle encyclopedia articles (including the article images and facts) can be freely used under Attribution-ShareAlike license, unless stated otherwise. Cite this article:
Drosera filiformis Facts for Kids. Kiddle Encyclopedia.