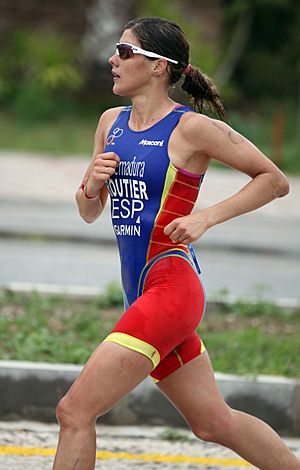 Routier at the European Cup triathlon in Antalya, 2011. 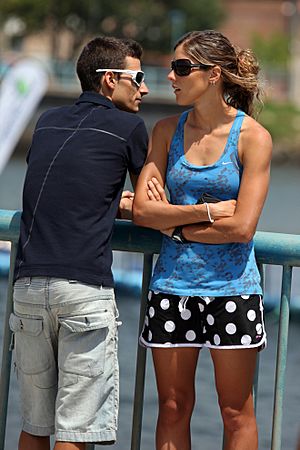 Routier and Mario Mola in Pontevedra, 2011.

Routier studied Advertising and Public Relations at the Faculty of Tourism of the Universitat de Girona, for which she won the silver medal at the Spanish University Triathlon Championships of the year 2010. She later dropped out of the Advertising and Public Relations studies to work towards a Communications degree from the Universitat Oberta de Catalunya.

In 2010 and 2011, Routier took part in 14 ITU events. In 2012, she won the Ibero American Championships in Chile and the Sprint African Cup in Larache. Unless indicated otherwise the following competitions are triathlons and belong to the Elite category. The list is based upon the official ITU rankings and the athlete's ITU Profile Page.

All content from Kiddle encyclopedia articles (including the article images and facts) can be freely used under Attribution-ShareAlike license, unless stated otherwise. Cite this article:
Carolina Routier Facts for Kids. Kiddle Encyclopedia.