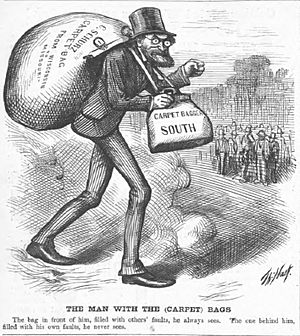 1872 cartoon of Senator Carl Schurz as a carpetbagger

Carpetbagger is a term from the United States political history. A carpetbagger was a northerner who moved to the South after the American Civil War. This period is called the "reconstruction era".

White southerners feared they would loot the defeated South. Sixty carpetbaggers were elected to Congress. Among them were most Republican governors in the South during reconstruction. A historian said:

"Carpetbagger" referred to the cheap carpet bags (a form of luggage) which many of the newcomers carried. The term came to be associated with opportunism and exploitation by outsiders. It is used today for a "parachute candidate": a political candidate for public office in an area far from home.

All content from Kiddle encyclopedia articles (including the article images and facts) can be freely used under Attribution-ShareAlike license, unless stated otherwise. Cite this article:
Carpetbagger Facts for Kids. Kiddle Encyclopedia.