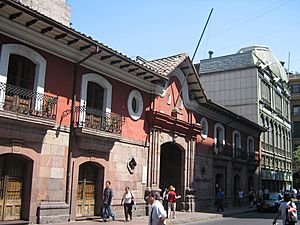 Casa Colorada [red ochre House] is raised with ashlar stone, his roof was mounted on beech beams, and the mezzanine on canelo wood. Timber framing is made of native bamboo. The constructor was Joseph de la Vega in 1769. This building served as home of Mateo de Toro y Zambrano and now is a Museum, managed by Santiago's Municipality. Kept there the collections, and scale models of the colony life. Casa Colorada was the place were the Chilean Declaration of Independence was signed on September 18th, 1810. This building was unique with a brick facade stone covered and two storys. In the first have had indoor successive backyards. The first one paved, with a walking trail, around cellars or depots and other products of the farm. The body of the street, was dedicated to commercial activity of family. In central place there was a rest, cuadra and lobby, separated by a patio given a space distinguishing semipublic from private areas. This interior backyard, was ornated of vines, flowers and trees, and corridors.

All content from Kiddle encyclopedia articles (including the article images and facts) can be freely used under Attribution-ShareAlike license, unless stated otherwise. Cite this article:
Casa Colorada Facts for Kids. Kiddle Encyclopedia.